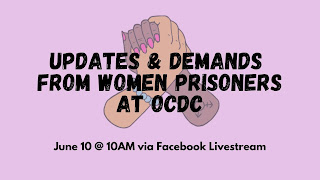 
10 June 2020 (unceded and unsurrendered Algonquin Territory / Ottawa) – This morning at 10:00am, the Criminalization and Punishment Education Project (CPEP) and Toronto Prisoners’ Rights Project (TPRP) are livestreaming statements (click here to watch the event) from criminalized women forcibly confined and subject to cis-heteropatriarchal state violence at the Ottawa-Carleton Detention Centre (OCDC). The human beings on the women’s side of the Innes Road jail in Ottawa will share their experiences of systemic discrimination and the impacts of draconian pandemic reforms issued in the name of public health over the past few months. Among the issues that will be raised during today’s event is that despite being obligated by law to accommodate the creed-related needs of prisoners, OCDC’s administration refuses to allow incarcerated Indigenous women access to cultural and spiritual activities. Brittany, a women confined at the Ottawa jail, explains: “We’d like to see smudging ceremonies brought back because we have a right to our religious beliefs and practices, and the ministry isn’t following through with that at all”.

Today’s action follows a hunger strike undertaken by 14 men at OCDC. Women at the Innes Road jail supported all hunger strikers’ demands and are calling for additional changes, including access to programming that reflects their intersecting identities, appropriate medical and mental health services, and an improved canteen list. Incarcerated women have also reported that the jail does not accommodate the needs of vegetarian people to the point of undue hardship by routinely forcing them to eat a vegan diet. Furthermore, OCDC often denies incarcerated women who want to stop using drugs access to appropriate drug substitution treatment and further stigmatizes them, which pushes people further to the margins and prevents them from caring for themselves. The conditioner and other personal care products provided by the institution are substandard and overpriced. The jail suspended the sale of makeup on the commissary. Sarah Speight explains the significance of their demands: “While some of these issues may appear unimportant, the impact of these deprivations weighs heavily on the women who are trying to cope with the trauma and state-sanctioned violence associated with the harmful practice of human caging”.

Statements from the women’s side of OCDC are being issued 18 months to the day that CPEP launched the Jail Accountability & Information Line (JAIL) in the midst of the coroner’s inquest into the preventable death of Cleve “Cas” Geddes. Since beginning its operations on 10 December 2018, the JAIL hotline has taken more than 5,000 calls from OCDC prisoners and their loved ones to address human rights issues and barriers to safe re-entry into the community they routinely face. Today’s event is just the latest effort by JAIL hotline staff and callers to bring attention to the issues facing criminalized people held at OCDC, including systemic discrimination.

In this past quarter – the sixth in the JAIL hotline’s history – the iniative worked with Muslim people held at the Innes Road jail to challenge the practice of forcing them to either observe their religious fasts or fulfill their medical needs by taking their medication during fasting hours during the holy month of Ramadan. As noted by CPEP legal counsel Fathima Cader on 7 May 2020, when Muslim prisoners were still facing systemic religious discrimination in the form of unflexible institutional routines, “No one should be forced to choose between their faith and their health”. With the work of the JAIL hotline, supported by Cader and 60 organizations, the OCDC administration and Ministry of the Solicitor General agreed to distribute medications to Muslim prisoners outside of fasting hours, rectifying a discriminatory practice that also took place during the holy month of Ramadan in 2019.

When a group of prisoners held in the 3B maximum unit at OCDC initiated a hunger strike on 3 June 2020 to demand healthy food, better access to cleaning and hygiene products, and additional ways to cope with restrictions imposed during the COVID-19 pandemic such as frequent lockdowns in the name of promoting physical distancing, the JAIL hotline had no choice but to stand in solidarity with them. With the support of numerous people, including Ottawa-Centre MPP Joel Harden, the hunger strikers – most of whom are racialized men that have experienced racism and other forms of discrimination throughout their lives – negotiated an agreement within 31 hours with the jail’s administration and the ministry to have many of their reasonable requests adopted. As a result, access to necessities like meals that follow the religious specifications of Muslim and Jewish prisoners was restored. Better access to hygiene products, as well as reading materials and television to cope with the heightened pains of imprisonment during pandemic times, was also secured. The JAIL hotline continues to monitor the implementation of the agreement the hunger strikers negotiated with the jail’s administration and the ministry in good faith.

As the JAIL hotline begins its seventh quarter, staff are working diligently with a group of Indigenous prisoners confined at our local colonial jail to ensure their access to sacred medicines and traditional ceremonies. It is urgent that OCDC’s administration and the ministry ensure Indigenous cultural practices like the 21 June 2020 change of seasons ceremonies can be observed, unlike the past three change of season ceremonies that were not allowed to proceed ahead without explanation. Food is also at the centre of the struggles Indigenous prisoners face against systemic discrimination as they are being denied access to culturally specific diets afforded to adherents to other forms of spirituality. This denial of culturally appropriate food contributes to the uffering inflicted upon them through imprisonment and other genocidal, colonial practices. As noted in their 5 June 2020 statement, Indigenous prisoners at OCDC have shared “our concerns with the wider public with the hopes that the OCDC administration will start respecting our identities and humanity, and accommodate our cultural, spiritual and dietary needs”. It is incumbent upon settlers to support their struggles for justice within and beyond prison walls by contacting the jail’s superintendent by phone at 613-824-6080 or email at mike.wood@ontario.ca to demand change.

In the context of the COVID-19 pandemic, prisoners at OCDC and elsewhere are facing more austere conditions of confinement under the pretext of public health such as diminished access to visitation, phone calls, yard and other features of incarceration that can alleviate the inherent pains of human caging. Justin Piché, a CPEP member and Associate Professor of Criminology at the University of Ottawa who has been tracking the impact of the pandemic on imprisonment notes: “What such developments again illustrate is that when afforded an opportunity, carceral institutions clawback the very things that contribute to the well-being of prisoners, which ultimately undermines the collective well-being and safety of our communities where incarcerated people come from and to which they’ll eventually return”. This observation made firsthand millions of times before by millions of people deprived of their liberty throughout the world and further substantiated by scholarly studies over the past several decades continues to inform the work by CPEP, the TPRP, and other allies who seek to reduce the use and harms of imprisonment, while working towards the defunding and eventual abolition of human caging and other carceral state apparatuses such as police so that healthy communities can emerge and transformative justice can flourish.

Reflecting on the work of the JAIL hotline over the past year and a half, Lead Coordinator Souheil Benslimane states: “Despite the hotline’s continued solidarity work with people caged in sites of human confinement to alleviate some of the harm inherent in carceral practices, we approach our accountability work from an abolitionist perspective and inform our struggles with the histories of Black slavery abolitionists on Turtle Island and beyond. They didn’t believe that slavery could be reformed – it had to be abolished. Just like slavery, the OCDC and all sites of human caging cannot be reformed as envisaged by progressive supporters of imprisonment. As people living on unceded and unsurrendered Algonquin territory, we must use every ounce of privilege we have to stand in solidarity with those impacted by the Canadian carceral state continued colonial mission, which is organized around and sanctions the use of violence through carcerality, border imperialism, cis-heteropatriarchy, and other oppressive social and political structures. These harmful systems threaten the well-being and safety of us all. We must dismantle this inherently violent, racist, ableist, classist, and patriarchal practice, to collectively build de-colonial futures free from violence in all its forms where everyone can live in peace”.

Posted by Administrator at 7:44 AM