In the wake of many lives shattered by the violence of policing and anti-racist calls to #DefundThePolice, the Ottawa Police Service once again has the audacity to propose an increase of its budget, requesting an additional 3% or $13.2 million in more funding for 2021. With this money, the city could instead invest in at least one of the measures included in an infographics series by the Criminalization that would actually enhance community well-being and safety. Click the images below to check them out. 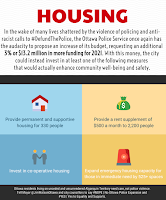 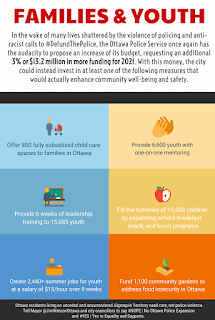 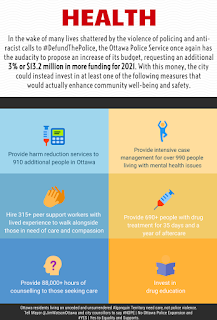 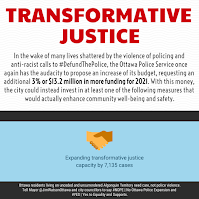 Ottawa residents living on unceded and unsurrendered Algonquin Territory need care, not police violence. Tell Mayor Jim Watson (via social media @JimWatsonOttawa or by phone at 613-580-2496), as well as city councillors to say #NOPE | No Ottawa Police Expansion and #YES | Yes to Equality and Supports.

Posted by Administrator at 9:13 AM