The Criminalization and Punishment Education Project (CPEP) is a group comprised of professors and students from Carleton University and the University of Ottawa, current and former prisoners, their loved ones, and other people dedicated to building safer communities for all. Since the group’s founding in 2012, members have sought to reduce the use and harms of imprisonment in the short-term through initiatives like the Jail Accountability & Information Line. CPEP has also pursued more ambitious long-term objectives through initiatives like the #NOPE | No On Prison Expansion campaign that promote government divestment from the punitive injustice system so that greater investments can be made in affordable and supportive housing, education, income supports, peer support workers, mental health care, harm reduction and drug treatment, and other community-based services that actually prevent, rather than react to and spur additional, social harm and violence. We also promote transformative justice as a less costly, more effective, and just means of meeting the needs of victims, promoting accountability, and fostering structural changes in affected communities to address the underlying causes of wrongdoing. CPEP opposes any and all efforts to increase state capacity to criminalize and cage human beings, including Premier Doug Ford and company’s plan to “improve public safety, modernize facilities and support economic recovery” through the construction of a new prison in Kemptville, replacing the Brockville Jail with a new and larger “Correctional Complex” that will also house an expanded the St. Lawrence Valley Treatment and Correctional Centre, expanding the Quinte Detention Centre in Napanee, and renovating the Ottawa-Carleton Detention Centre. Below, we outline ten reasons why we support the efforts of North Grenville residents who oppose the Ontario Ministry of the Solicitor General’s so-called Eastern Region Strategy, including the planned “Greater Ottawa Correctional Complex” in Kemptville. 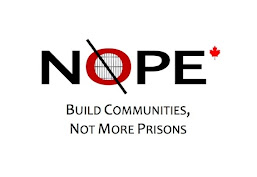 1. Disrespectful and undemocratic: On 27 August 2020, Ontario Premier Doug Ford, Solicitor General Sylvia Jones, along with Cabinet minister and MPP for Leeds-Grenville-Thousand Islands and Rideau Lakes Steve Clark announced that the province plans to build the new 235-bed “Greater Ottawa Correctional Complex” in North Grenville. The decision to build the facility was cooked-up in downtown Toronto boardrooms by provincial politicians and bureaucrats without consultation with local residents and municipal politicians who never imagined their community would become a prison town.

2. Destroys agricultural land in the midst of global environmental and food insecurity crises: The new prison, which is also being called the “Eastern Ontario Correctional Complex”, is slated to be built on a portion of a 182-acre parcel of provincially-owned farmland once used by the Kemptville agricultural college. Once built, the Ontario Ministry of the Solicitor General will have considerable room to expand the new prison many times over should Queen’s Park elites deem it an appropriate course of action for the province. We agree with local residents who argue that there are more environmentally responsible ways of using this land for the purposes of economic development, including agricultural development to produce food for North Grenville and surrounding communities that would carry a smaller carbon footprint than goods imported from around the world at a time when food security is a critical issue facing people, both locally and elsewhere.

3. Unnecessary and wasteful: In February 2020, there was an average of 8,269 people held in Ontario’s provincial prisons. By April 2020, the province’s prison population declined by 29% to an average of 5,859 prisoners through a series of diversion measures like bail and decarceration measures like temporary absences to reduce the risk of COVID-19 transmission behind bars and communities where facilities are located. It makes no sense to expand Ontario’s capacity to cage people at a time when researchers and advocates note that more people can be safely diverted and decarcerated from custody through more investments to address the needs of people pushed to the margins.

4. An investment that compounds rather than addresses the bail crisis: On any given day, roughly two-thirds of provincial prisoners in Ontario are in pretrial detention and awaiting court dates, sometimes for months and even years. This remand population has grown massively over the past three decades due to clogged courts and problems with the bail system. Instead of spending hundreds of millions on building more prison spaces, including in Kemptville, the Government of Ontario should be investing significantly more in bail reform and other measures to reduce prison numbers now.

5. More cages and prison jobs aren’t good for people: Ontario provincial jails and prisons are widely recognized as toxic environments marked by deaths by suicide and abuse, extended use of solitary confinement, notably for prisoners living with mental health issues, little or no therapeutic or recreational opportunities largely due to institutional order and security taking precedence over prisoner efforts to better themselves, and grossly inadequate food, medical and mental health care. While the province argues more prison spaces will improve conditions of confinement, new provincial facilities like those in Windsor and Toronto haven’t delivered on their promises to be more humane settings for prisoners or staff. And while the new prison may generate new jobs in the facility, some of which may go to North Grenville residents, with these positions come workplace injuries, psychological trauma and associated social problems. These are not the jobs governments should be expanding given the damaging impacts of imprisonment on prison staff, their loved ones and communities.

6. Imprisonment deepens inequality in an era of Reconciliation with Indigenous peoples and amidst struggles to end anti-Black racism across the world: Indigenous people are 2 percent of Ontario’s population and 13 percent of its prisoners. Statistical data shows Black people often spend longer behind bars awaiting trial than their white counterparts charged with similar offences. Many of Ontario’s prisoners are poor and homeless. We all have a responsibility to end discrimination, not further entrench it through building new prison spaces.

7. We will continue to needlessly jail those living with mental health issues and drug users: Over the years, ministers and officials responsible for Ontario’s prisons have repeatedly stated that their goal is to get people who are experiencing mental health and drug use issues appropriate care in the community, not to incarcerate them. Committing hundreds of millions of dollars to build new prisons, while expanding or renovating existing ones, is the wrong way to start.

8. Massively expensive: According to Infrastructure Ontario, it'll cost between $200 million to $499 million just to design, build, finance, and maintain the new “Greater Ottawa Correctional Complex” through a 30-year public-private-partnership that will principally line the pockets of large construction firms and the big banks. Based on figures provided by the Government of Ontario to Statistics Canada, the new 235-bed prison will also cost around $62,040 a day or more than $22.6 million a year just to operate. This money could be spent in the community to enhance our collective safety and well-being, while keeping people out of prison.

9. Do something with that money to help now! The provincial government plans to start construction of the new Kemptville prison in 2024 and open it in 2025, while large gaps in community care and services exist in eastern Ontario that need to be filled today.

10. Imprisonment doesn’t work: Historically, prisons have proven both very costly and to fail at meeting their stated objectives. Criminological research shows that incarceration is the least effective way to enhance safety or deter law-breaking. Imprisonment damages prisoners, along with their loved ones and communities.

Posted by Administrator at 4:20 PM