In May, the Criminalization and Punishment Education Project (CPEP) organized two events that captured some of the damage that the Conservative Government of Canada's punishment agenda has done, both inside and outside prison walls.

On May 26th, concerned members of the Ottawa community gathered at the West End Well Co-op for a screening of Til the Cows Come Home, which documents the Harper government's decision to shut down Correctional Service of Canada prison farms.  Centred in Kingston, the film captures the strong and sustained resistance of citizens, farmers, local politicians and others who rallied around to try to save the program that helped federal prisoners transition back into society safely.

The screening was followed by a panel discussion chaired by Anita Grace (far right) that featured 1) Shaun Shannon (centre), a former prisoner who spoke about the benefits of the prison farms based on his first-hand experience, 2) Mary Campbell (left), a former Director General of Public Safety Canada's Corrections and Criminal Justice Directorate who located the prison farms closures within the current federal government's willingness to discard more humane and effective penal policies and practices in favour of harsh and reckless measures, and 3) Clarke Mackey, an award-winning producer-director and one of the filmmakers who talked about on-going efforts to re-instate the prison farms program.

Later that week, CPEP hosted its third annual Artists for Social Justice Open Stage & Art Exhibition on May 29th.  Those gathered shared their works that took many forms such as paintings, dancing, poems, songs and other contributions.  Funds were also raised to support Justice for Deepan. 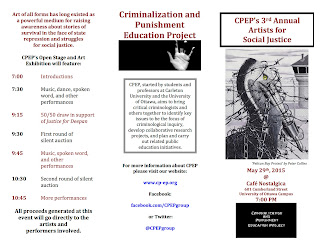 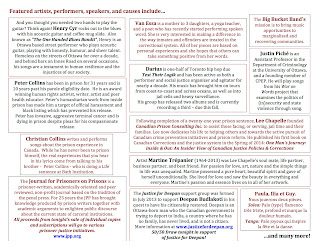 As CPEP looks to the summer, our efforts have turned towards working with others groups on organizing Prisoners' Justice Day (PJD) events on August 10th to grieve deaths in custody and to stand in solidarity with the imprisoned to demand human rights for all.  News about what is planned for PJD on Algonquin Territory / Ottawa will be announced in the weeks ahead.

With the 2015 federal election campaign looming, CPEP will also be working and collaborating with other public education groups on a number of initiatives (e.g. presentation slides and notes, blog posts, fact sheets, videos, debates and voting workshops) to build awareness about costly, unjust, and ineffective penal policies and practices.  Some of these harms of criminalization and punishment are documented by contributors in this edition of tpcp-canada who note gaps in human rights rhetoric and practice, as well as their collateral consequences on the families of the incarcerated.   In the months ahead, we will also promote alternatives in the hopes that all federal political parties will commit to adopting measures that will give the space and resources necessary to those most affected by criminalized conflicts and harms to work towards healing to the degree that is possible.  Those interested in working with CPEP can contact us at cpep.action@gmail.com.

Who cares about mothers of the criminalized?
by Farhat Rehman, Member, Moms Offering Mutual Support (MOMS)

Posted by Administrator at 9:10 AM No comments:

International standards for the treatment of prisoners


For over 50 years we have had international rules concerning the minimum standards for the humane treatment of prisoners. These rules call for necessities of life, such as nutritional food, exercise and access to health care. Unfortunately, the rules are not legally binding. So even when countries (like Canada) endorse them, no obligations exist to ensure compliance.

Rules for the treatment of prisoners

The Standard Minimum Rules for the Treatment of Prisoners (SMRs) provide international guidelines for the treatment of people who are incarcerated. They were adopted by the United Nations (UN) General Assembly in 1955 and were among the first international instruments aimed at protecting the rights of people accused of committing criminalized offences.

The Bangkok Rules (UN Rules for the Treatment of Women Prisoners and Non-custodial Measures for Women Offenders) were adopted by the UN General Assembly in 2010. They provide standards for the treatment and care of criminalized and incarcerated women.

All UN member states are encouraged to implement the SMRs and the Bangkok Rules in the administration of carceral institutions, and to consider incorporating them in relevant legislation. But the rules are not binding instruments that states sign and ratify. So countries are not legally bound to comply with them, even after endorsing them.

In 1975, Canada officially endorsed the SMRs. This meant that Canada agreed to consider embodying the SMRs within both federal and provincial legislative frameworks. However, the Canadian Corrections and Conditional Release Act (CCRA) does not invoke or even allude to international obligations and norms, such as the SMRs.

The SMRs provide principles of good practice in the treatment of prisoners and the management of carceral institutions. They are an important point of reference for defining what constitutes the humane treatment of those imprisoned in a prison setting.

A fundamental aspect of the rules is that they are to be applied impartially and without discrimination on grounds of race, colour, sex, language, religion, political or other opinion, national or social origin, property, birth or other status. At the same time, the SMRs mandate respect and accommodation for religious and cultural differences.

Some of the specific standards stipulated in the SMRs include the provision of:

Prohibitions for prisoner treatment include:

Special requirements for women prisoners include:

Additionally, according to the Bangkok Rules:

Since most prisoners will eventually return to the community, the SMRs address the right to be reasonably prepared for reintegration.  This includes:

Canada and the SMRs

The Correctional Service of Canada (CSC) suggests that “Canadian law and correctional policy have taken into account” the SMRs. The agency also identifies three fundamental human rights principles upon which the SMRs are based:
However, the 2013-2014 Annual Report from Howard Sapers, the Correctional Investigator of Canada, describes Canadian federal prison environment as “one marked by disease transmission, environmentally exacerbated health decline and death, and heightened risks of mental illness”. As the Correctional Investigator, Sapers has consistently pointed to the failures of federal corrections to apply the SMRs.

In 2013, Sapers identified specifically some of the areas in which Canada does not comply with the SMRs.
More research is needed to document the ways in which jails, detention centres, prisons and penitentiaries fail to implement the SMRs and the Bangkok Rules. If you know of examples of failed implementation, please post them in a comment below.

Posted by Administrator at 9:09 AM No comments: