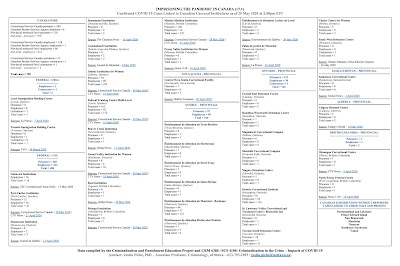 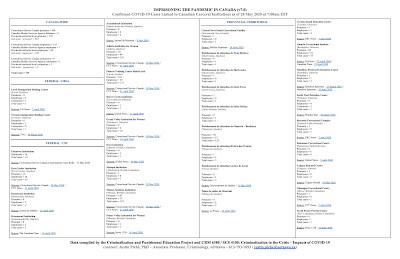 OTHER RELEVANT COVID-19 RESOURCES
COVID-19 in Canada's Federal Prisons (click here)
Posted by Administrator at 7:27 AM No comments:

Update Regarding Ramadan Accommodations for Muslim Prisoners at OCDC


25 May 2020 (Algonquin Territory / Ottawa) – Eid Mubarak to all Muslim people on Turtle Island and beyond.

During the Islamic month of Ramadan, many Muslims – including people behind bars – observe daily fasts, abstaining from all food and drink from sunrise to sunset, including medications. Since at least Ramadan 2019, the Ottawa-Carleton Detention Centre (OCDC) has failed to consistently distribute medication to fasting Muslim prisoners during their non-fasting hours, despite numerous requests by prisoners. This is discrimination on the basis of health and creed.

On 28 April 2020, the Jail Accountability & Information Line (JAIL) hotline wrote to OCDC’s Acting Superintendent relaying prisoners’ concerns. When OCDC failed to provide a substantive response, legal counsel to the Criminalization and Punishment Education Project (CPEP), Fathima Cader, wrote to the jail’s administration on 7 May 2020 requesting they accommodate Muslim prisoners on an urgent basis. CPEP stressed that OCDC should not be forcing people to choose between their faith and their health.

CPEP’s legal letter was endorsed by sixty civil society organizations and supported by the Ontario Human Rights Commission (OHRC). CPEP shared its letter with signatories, the media, and the general public.

To date, OCDC has not responded to CPEP directly. Instead, on 13 May 2020, the Ministry of the Solicitor General sent an email to then OHRC Commissioner Renu Mandhane responding to an article that Muslim Link – a local newspaper – had published about OCDC’s failure to accommodate Muslim prisoners. In this email, an Assistant Deputy Minister admitted that OCDC had failed to accommodate the Muslim prisoners on at least five days, but asserted that this was no longer the case.

Throughout Ramadan, the JAIL hotline continued to track medication delivery at the OCDC. Prisoners have reported that after CPEP issued its legal letter, OCDC began providing Muslim prisoners with their medications during non-fasting hours. While we count this as a success, some issues continued:

With the conclusion of Ramadan this year, the JAIL hotline remains committed to monitoring OCDC’s treatment of prisoners, including next Ramadan and beyond. We stress that the discrimination Muslim prisoners face is not isolated to them alone. OCDC routinely fails to accommodate the creed-related needs of Indigenous prisoners and the health needs of ill prisoners. Systemic discrimination at OCDC on the basis of identity is the norm, rather than the exception. OCDC’s longstanding history of human rights abuses and the abject failure of all sites of human caging to meet their stated objectives point to the need to move away from systems that reproduce harm and to build communities rooted in solidarity and love. 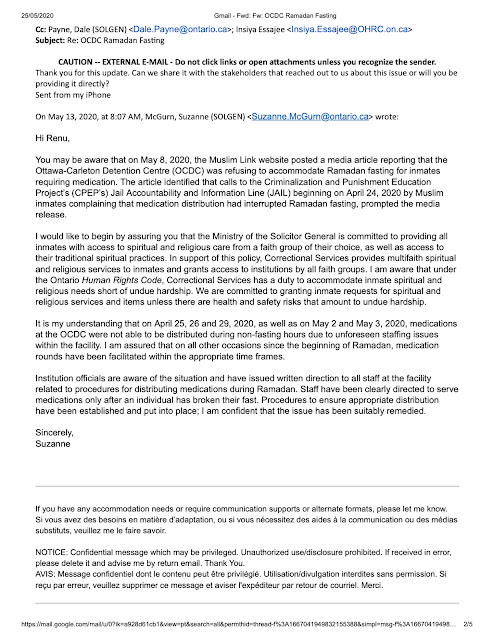 Posted by Administrator at 8:14 AM No comments: 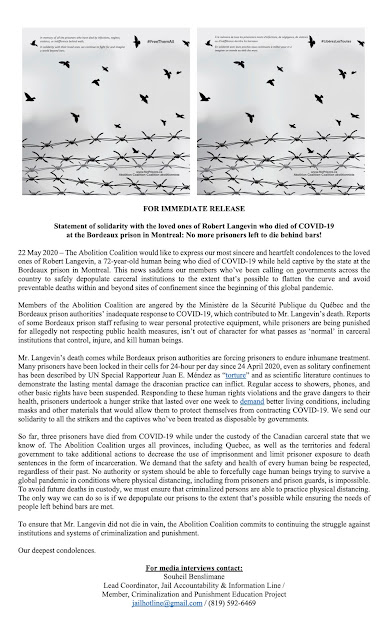 Posted by Administrator at 8:37 AM No comments:

Note: I have requested that the Correctional Service Canada (CSC) and its provincial-territorial counterparts publicly release their respective prison population counts for the 1st and 15th of every month as this would provide an accurate and uniform data set through which to examine carceral depopulation during the COVID-19 pandemic. Such disclosures should be a regular occurrence in 'normal' times as well.  The figures below have been compiled from media reports published over the past month and a half. Recent average daily counts for some jurisdictions, which would allow for a determination of the percentage of prison population decline that has occurred during the pandemic, were not reported in some cases. Where such figures are not available, one can still gain a sense of the significance of jurisdictional prison population reductions by looking at resources such as the average daily prisoner counts for 2017-2018 published by Statistics Canada (e.g. the provinces and territories held an average of 24,355 prisoners on any given day in 2017-2018 and if these numbers remained relatively stable until recently, it is estimated that there are almost 1 in 4 fewer provincial-territorial prisoners today than there were incarcerated at the beginning of the  COVID-19 pandemic). It is also important to note that the declines in prison populations reported may not necessarily be linked to COVID-19 prevention measures (for example, see the recent analysis of the CSC case by journalist Justin Ling, as well as recent figures and comments from the Office of the Correctional Investigator of Canada). 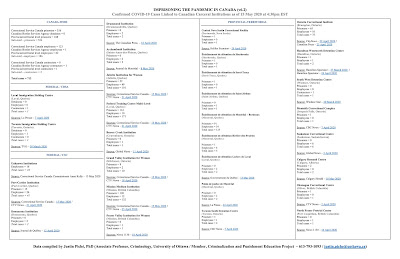 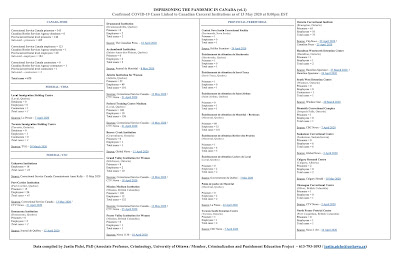 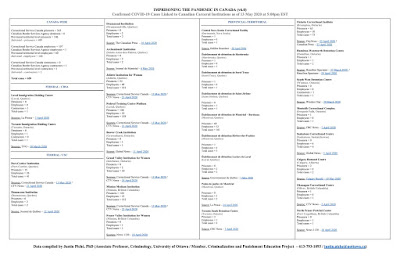 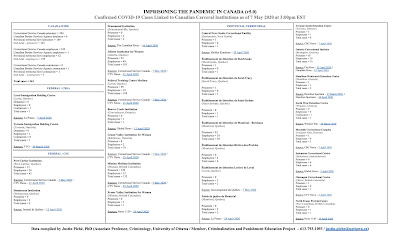