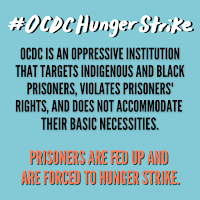 22 July 2020 (unceded and unsurrendered Algonquin Territory) – Today, people incarcerated at the Ottawa-Carleton Detention Centre (OCDC) began a hunger strike demanding immediate changes to jail conditions. This action follows a 31-hour hunger strike initiated on June 3rd during which OCDC prisoners demanded healthier food, hygiene products, and increased access to reading materials and television. The strike ended on June 4th following “successful” negotiations between strikers and the jail administration, who committed to meeting the striker’s demands. More than a month and a half later, OCDC has failed to follow through on meeting their obligations under the agreement they made with the hunger strikes.

In response, people incarcerated at OCDC have reinstated their hunger strike on both the men’s and womxn’s sides of the jail, and issued a new set of demands. This morning at 10:00am, the Criminalization and Punishment Education Project (CPEP) will be livestreaming statements from people incarcerated at the Ottawa jail on Facebook, Twitter, and Youtube (note: the livestream will be pinned at the top of each of our social media platforms for viewing). In these statement, confined persons outline longstanding issues leading up to this strike including issues with the food system, inadequate cultural supports, poor medical services, and systemic discrimination based on gender, race, mental and physical ability, and other determinants of identity. They will also share their collective demands for change and additional demands highlighting issues impacting incarcerated women, Indigenous, Black, and other people of colour behind bars, and those made vulnerable by the Ontario Ministry of the Solicitor General (MSG) in the context of a global pandemic. Their demands can be read here and will be published on our website following today’s event. CPEP is also organizing a rally in solidarity with the hunger strikers in front of OCDC this Friday, July 24th at 10:00am (click here for details).

OCDC is among the many institutions that perpetuate and enforce colonial and patriarchal state-sanctioned violence. Erica Brazeau, a Métis woman incarcerated at OCDC, explains: “…not only does OCDC disrespect our culture and our spirituality, they make us do mandatory strip searches every two weeks in front of each other without suspicion. This feels like sexual assault”. Instead of expanding its capacity to control, traumatize, injure, and kill Indigenous peoples through imprisonment, the Government of Ontario must immediately enact measures to release all Indigenous prisoners, beginning with women and young people. In the interim, OCDC and the Ministry must meet their demands for changes to jail conditions.

Aside from its inherent anti-Indigeneity, OCDC and a number of its staff engage in anti-Black violence, xenophobia, and authoritarianism. Eid Aden has been imprisoned at the OCDC for 3 years. He is a Somali man who lives with mental health illnesses. He informed the Jail Accountability & Information Line that the guards “call me names and make fun of my hair. Sometimes they call me a retard and I would like them to change that and talk to me normally instead of calling me names and telling me to go back to my country, and calling me a piece of shit”. In the midst of the #BlackLivesMatter movement, when Black peoples are leading the struggle for the complete eradication of anti-Blackness, OCDC tries to stifle Mr. Aden’s right to protest and express himself freely. When he drew “BLM” on his shirt, he alleges that the guards threatened him, denied that racism exists at OCDC and physically assaulted him. He also alleges that when the OCDC guards had their knee on his kneck, Mr. Aden repeated Eric Garner’s famous sentence, which Mr. Garner uttered 11 times before being killed by the police: “I can’t breathe”. Mr. Aden’s demands are included in the materials CPEP is publishing today.

In addition to challenging the deep structural roots of imprisonement, prisoners who are forced by the MSG to expose themselves to harm by engaging in a hunger strike in order to be heard by the public are also demanding the most basic necessities of life. An anonymous OCDC prisoner declares that he has “rashes and dry skin. The lack of hygiene is shocking and outrageous”. Kyle Bancroft, a person living with a disability who has been confined at the OCDC for the last 35 months, adds: “in the last 81 days, OCDC refused to give me a shower assisted by a personal support worker (PSW) for 45 days, despite that the PSW comes into the institution daily… I spent 12 days with no clean clothes”.

The hunger strikers’ demands were echoed with some variations throughout the jail and beyond. Prisoners at the Central East Correctional Centre (CECC) also issued a list of demands in solidarity with the OCDC hunger strikers, which can also be found on our website. CPEP will continue to work alongside people behind bars to end the inherently violent practice of human caging and the oppressive systems it upholds. 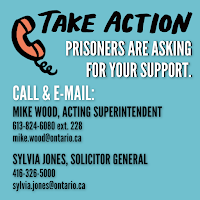 Posted by Administrator at 9:12 AM